To mark the Charles Dickens bicentenary in 2012, Film and Video Umbrella commissioned four online artworks that took Dickens’ final novel as an allegorical tale with numerous echoes in the present.

Manifesting in several locations both on and offline from the Dickensian heartland of Borough and Bankside to the author’s birthplace in Portsmouth and his regular place of retreat along the North Kent coast near Margate, Our Mutual Friends mobilised Facebook, Twitter, Instagram, YouTube and other social networking sites to apply Dickens’ satire on ‘society’, ‘celebrity’ and the superficiality of friendships to our contemporary cultural moment.

Instead of the Victorian scrapheaps and ‘dustheaps’ which loom large in the novel, the project highlighted the vast accumulation of digital detritus that clutters our everyday lives, and drew parallels between an era of industrial dirt and waste and the apparently disposable and throwaway nature of contemporary digital communication.

Links from Our Mutual Friends to the original external sites have been replaced with an archive version of each artwork.

Gayle Chong Kwan’s The Golden Tide peruses the flotsam and jetsam of the river, and traces how the images of the objects that she finds there later proceed to wash up online. Following the course of the River Thames from London Bridge through the creeks and marshes of North Kent towards its furthermost estuarine reaches around Margate, Chong Kwan records a spate of small-scale, everyday beachings – each isolated item adding to a steady stream of digital snapshots uploaded to the popular digital photo app, Instagram. From these random encounters and the places near to where she encounters them, Chong Kwan selects a number of beguiling or noteworthy images, which she collages together into a myriorama – its antiquated form echoing the muted ‘archival’ patina of Instagram’s trademark look. These myriorama images will be printed as a regular series of posters, and flyposted on the outside of the Jerwood Space in Bankside, where they too will be left to weather over time. 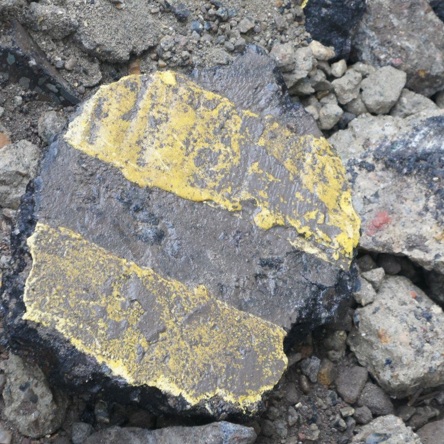 Making a series of imaginary incursions across London (that correspond to the five Dickensian walks that have been devised for Our Mutual Friends), Graham Hudson’s Works in Progress echoes Dickens’ own method of recording overlooked everyday details in his peripatetic observations of London life. Rather than the disparate people who make up the capital, Hudson’s focus is on the marks they make – in particular the intrusions and disruptions of road works, and their unexpected knock-on effects. In an escalating almanac of images, accessible from his Facebook page, Hudson meticulously documents these irregular outbreaks on the surface of the urban environment – each temporary roadblock providing a pause for thought, and an opportunity to photograph what surrounds it. Fascinated by the way these public works leave rubble behind them in random sculptural arrangements, Hudson celebrates each makeshift ‘installation’, piling image upon image, and, in a special satellite of the project in Dickens’ birthplace of Portsmouth, gathering together actual physical debris from local sites. As if alluding to the extent to which even the most short-lived interruption can seem to drag on forever, Hudson implies that the ultimate ‘work in progress’ may well be the modern city itself.

View the videos and images here 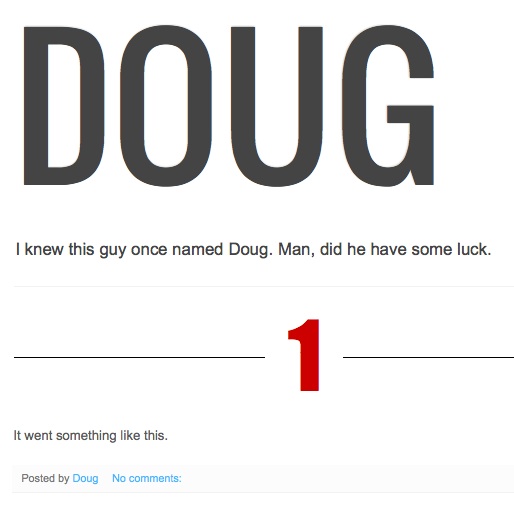 Janice Kerbel blogs about the misadventures of a fictional character called Doug. Part innocent fool, part hapless fall guy, Doug is no stranger to the streets of the city yet seems utterly oblivious to its perils and pitfalls, which conspire to trip him up at every step. Written out sparingly, and almost warily, as if knowing and fearing what is about to take place, each entry follows a familiar pattern in which Doug is led through a succession of scrapes, that usually end with him finding himself in mortal danger. Although the narrative arc is always the same, the exact shape of Doug’s near-denouement changes, according to nature of the accident that is about to befall him. Continually escaping by the skin of his teeth, and apparently doomed to repeat his fate, Doug never sees the writing on the wall. Whatever happens leaves no mark on him, or no trace in him. He simply picks himself up… until it happens all over again. 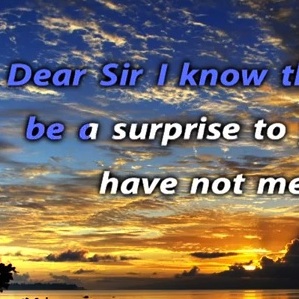 More Songs of Innocence and of Experience (2012)

It doesn’t take long to work out that the hard-luck stories and heart-rending pleas of Thomson & Craighead’s More Songs of Innocence and of Experience have been lifted from examples of that contemporary symbol of mounting junk, the spam email. Taking their place in a long and inglorious history of scams and schemes, these overwrought appeals to the kindness of strangers prey on people’s credulity but often induce a feeling of indifference or cynicism. Unreeling like a karaoke autocue, to an electronic soundtrack with all the cheap pathos of an old-fashioned musical box, Thomson & Craighead’s reworking of this material prompts us to look again at these lurking presences in our day-to-day lives, and their wider significance as a record, and indictment, of our time. Parading a back-story as pitiable and poignant as any beggar or busker on the Victorian streets, More Songs of Innocence and of Experience serves to remind us how, even as technology continues to ring the changes, human nature has remained pretty much the same.

More Songs of Innocence and of Experience (2012)